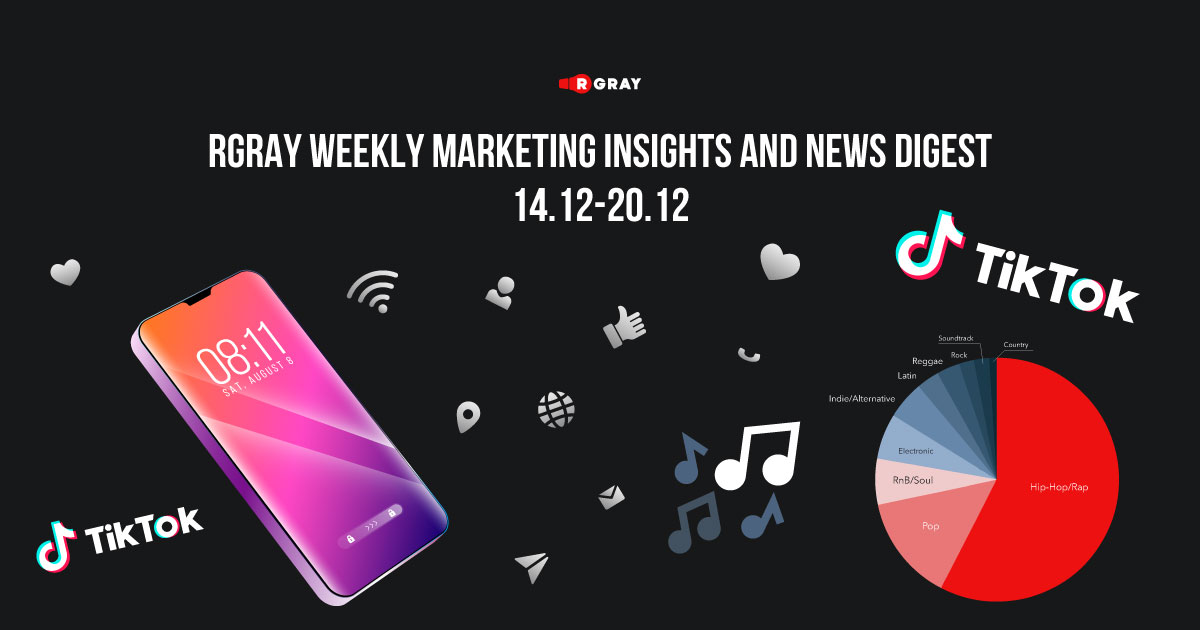 Why has Cyberpunk 2077 caused such hype? 10 valuable marketing lessons, 5 key stages to a $1M product launch, top tracks and artists on TikTok in 2020, and much more from the world of digital marketing in our new episode of the RGray Weekly Marketing Insights and News Digest.

The story of a cyber fail

“What is Cyberpunk 2077 and why is there so much hype behind this game?”

Now, it’s already December 2020 and Cyberpunk 2077 is the second most mentioned topic of the outgoing year. (the first one we guess you all know).

The game was released on December the 10th. But before its launch, there already were lots of merchandise even including Cyberpunk 2077 branded smartphone (OnePlus 8T).

Before the official release, pre-order sales were already above the expense of marketing and production. We’re speaking about over 8 million pre-orders that enabled CD Projekt Red, the parent company of the video game, to be profitable from the first day.

Why has the game caused such hype?

But all this positive hype turned out to be negative as the product launch after 8 years of waiting became a nightmare.

Some gamers faced flaws and low-quality resolution that turned the excitement into an angry gamer bomb, with Sony offering PS4 and PS5 players refunds. “The score on Metacritic is 2.9 out of 5, with some users describing it as the decade’s biggest failure.” And since the release, the stock of CD Projekt Red has decreased nearly 40 percent.

The Cyberpunk 2077 story will definitely become a valuable lesson for brands. If there is an opportunity to underpromise or overdeliver – do it! But don’t hype up a product only for it to fall short of expectations.

If you visit Twitter’s marketing section, you’ll know that someone always spouts some kind of insight or thought leadership.

It is not so frequently that we get a thorough reflection from someone who has been in the organization for a while. Andrea Bosoni posted 10 tips based on the 10 years of experience in marketing. A couple of our favorites are here:

Take a look at the other tips from Andrea Bosoni on Twitter.

In June 2019, Chris Jordan experienced something that is described as “Marketing Director’s Nirvana.”

It occurred when in only 40 minutes, his e-commerce customer sold over $400,000 worth of new items on Kickstarter. The revenues reached $1 million in total in the ensuing 60 days.

In this article, Chris describes how any company, B2B or B2C, can plan and implement similar product launches, and hopefully carry you to the state of “marketing nirvana.”

Ready for the release of an otherworldly good or service?

The aim here is to detail the ideas, practices, and processes that your brand would use to launch a product to sell.

Here are five main points of the plan:

Here are some of Chris’s recommendations:

This is the set of creative and replicating resources you will use during the release: video, blog posts, press releases, email sequences, testimonials, etc.

Step 4 – Make a splash on your launch day

The day of the release is as important as the week before the launch day. To build excitement and heat up your audiences, use this period.

Put all of the resources that you generated in the previous phase to work.

If the launch was successful, your purpose is to keep the launch momentum going for days, weeks, and months.

Here are some tactics suggested by Chris:

As nowadays, music is an integral part of TikTok, they decided to share new insights of top tracks and artists on the platform in 2020 which can give you an overall idea of the platform, its trends, and interests.

It is claimed that over 175 songs have now reached more than 1 billion video views as sounds on TikTok and, in the previous year, over 70 artists, who succeeded on TikTok, received major label deals.

So, what were actually the main trends on the platform?

TikTok has shared a list of music tracks that have reached one billion views lately:

“The below list of the ten fastest songs to reach 1 billion video views reflects the community’s enthusiasm for new songs by stars like Drake and Billie Eilish, but some of the year’s most viral hits came from unexpected sources. The list includes rap hits from regional stars like Detroit’s Sada Baby and Houston’s BeatKing and songs by artists like Popp Hunna and WhoHeem who were virtually unknown before their viral moment.”

Same as Vine, which used to be the most trending platform, TikTok can stimulate sales growth and attract the attention of new audiences and artists.

That emphasizes TikTok’s influential capacity, and the latest in-app trends, which can be worth noting to get a better understanding of what people are listening to and how they are reacting.

Hip-Hop/Rap is strongly influential in terms of genres on TikTok:

It’s also worth remembering because if you were hoping to take that leap in 2021, it might help inform your approach to the platform.

TikTok also states that it has helped to amplify numerous upcoming performers through clips, as well as increased awareness among a new generation of older, classic albums and artists (like Fleetwood Mac).

Music is certainly essential on the app, and again it is worth noting these key trends if you want to make TikTok part of your digital marketing strategy.

The complete 2020 TikTok Music Study can be read here.