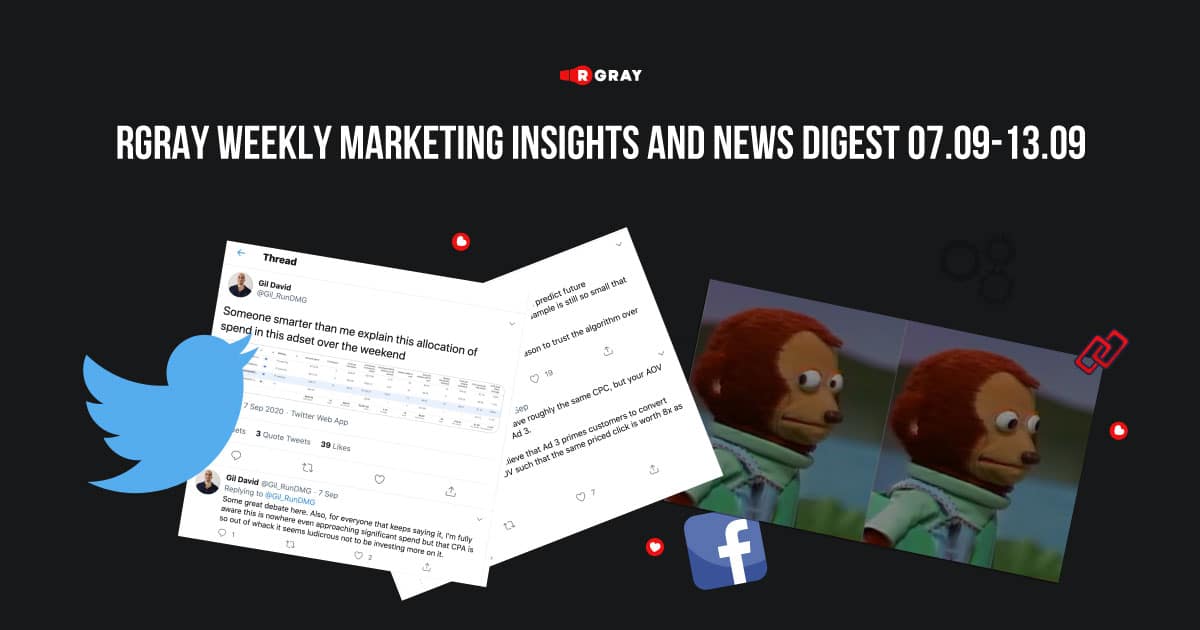 Does Facebook recommend you ‘bad’ ads over good ones? How to get into the Google Ads during the holiday seasons? Is it important to include your brand in your title tags? How to deal with drama properly? This and much more from the world of digital marketing in our new episode of the RGray Weekly Marketing Insights and News Digest.

If you’re advertising on Facebook, you know there’s an algorithm that decides which of your ads to serve, and it’s designed to optimize your income – Facebook shouldn’t, in principle, serve poor-performing ads over standout ones. True?

Andrew Faris and Gil Davis had a conversation in a Twitter thread about why Facebook could sometimes recommend your ‘bad’ ads over your good ones.

Here’s a rundown of the talk:

Two of Gil David’s ads for the same sale produced a similar CPC, but one of the ads had a significantly higher CVR and AOV. As Andrew has pointed out, this is very difficult to stay consistent with a larger ad budget – often requiring luck and chance!

If the ad spent on your Facebook campaigns looks suspicious, try considering the advice before you panic! The Facebook algorithm doesn’t always know best, and flukes do occur – so it’s generally wise to analyze anything before making drastic changes.

Marketers are preparing for Q4 madness, and the vast majority is almost ready to go for some alternatives to Facebook – particularly looking at what occurred on Facebook in the holiday seasons of 2018 and 2019.

Frankie Quiroz, whose latest Google ads made $468k for his branded, on-demand-print store at 6.5x ROAS, shared a post with some relevant tips on how to get into the Google Ads during this season:

These are some effective practices for giving your Google campaigns a head start!

3. Should you include your brand in your title tags?

Most sites have their brand and other text included in the title tags, such as category, product name, author tag, and taglines. This is known as boilerplate material. Four aspects are determining whether or not you should have these boilerplate features in your title.

Let’s take a look at them.

These four points should be useful while answering this question. What you just have to know, though? Test some modifications on your platform! Maybe, before trying, you want to assess your boilerplate brand strength and relevance.

How to assess your brand strength and the importance of the boilerplate.

“For each piece of boilerplate, determine the number of URLs on your site that rank/receive traffic for those keywords.”

It is showed how to do it in the Search Console:

+   Here’s what you want to do: Calculate the number of URLs on your

A site that ranks / receives traffic for those keywords for each piece of boilerplate.

So if your brand gets a lot of queries, for example, it means you have a strong presence. And then the title tags should contain the company name.

Do this for categories, product categories, or other keywords and the results will show their importance.

However, we always suggest testing!

4. Xbox showed everyone the proper way to handle drama on social media

Dealing with social media issues is one of the biggest challenges marketers bump into. It’s crucial to deal with the scandal until it bursts into a wildfire of negativity and destroys sales figures.

Details about one of Xbox’s new consoles, the Series S were leaked yesterday morning. However, Xbox handled the leak in an artful and expert way.

What’s so significant? Xbox addressed the console leak with humor and authenticity, which created attention on social media and earned some interest in the gaming community. If your company is on social media, it is crucial to learn how to handle unforeseen circumstances like this one.